"Southam" took a dip whilst tied at the Heritage Boatyard. That was Friday morning. Now, Sunday, she's up again thanks to Kim, Stephan and a few pumps. She's not taking on a huge amount of water but one of her pumps has stopped working. I think that's what caused the problem. I got there just a bit too late on Friday to prevent her going down. 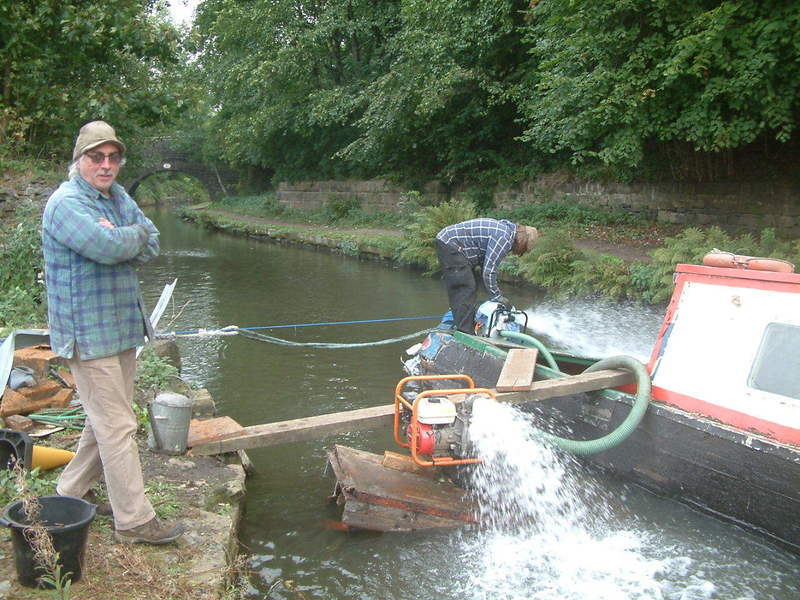 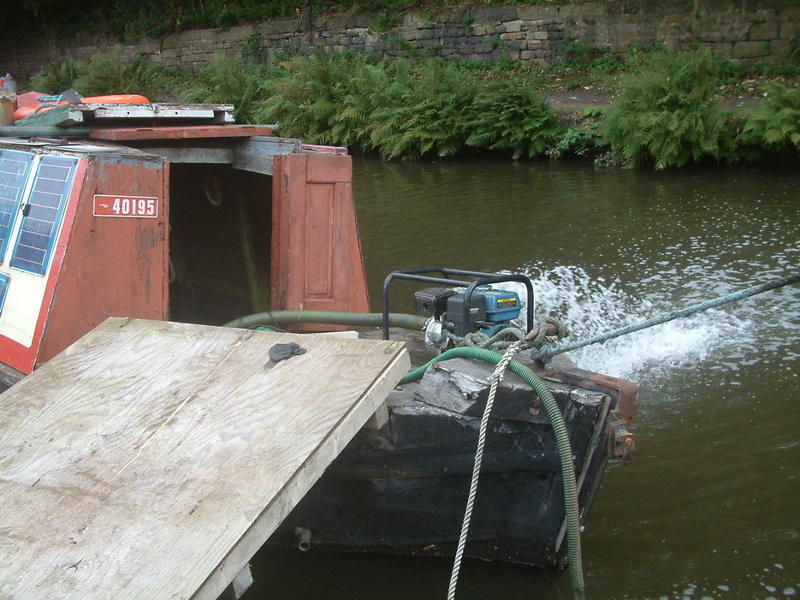 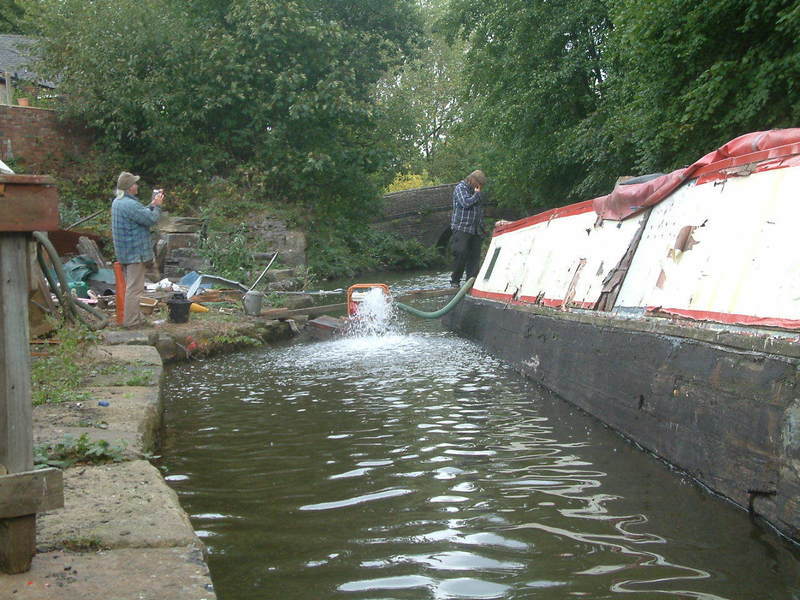 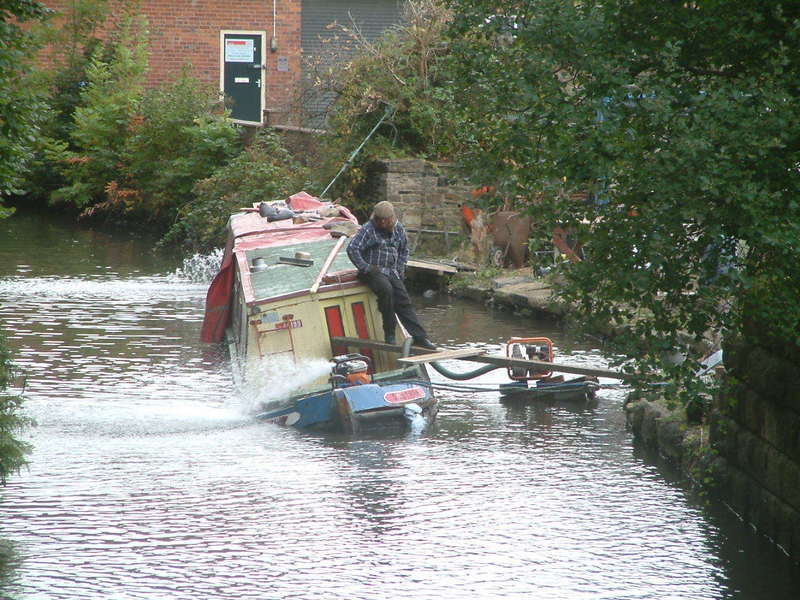 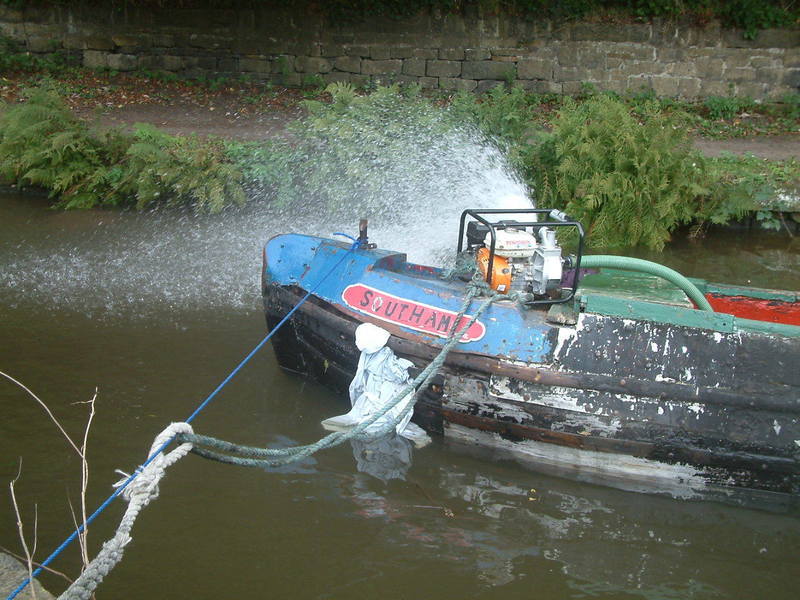 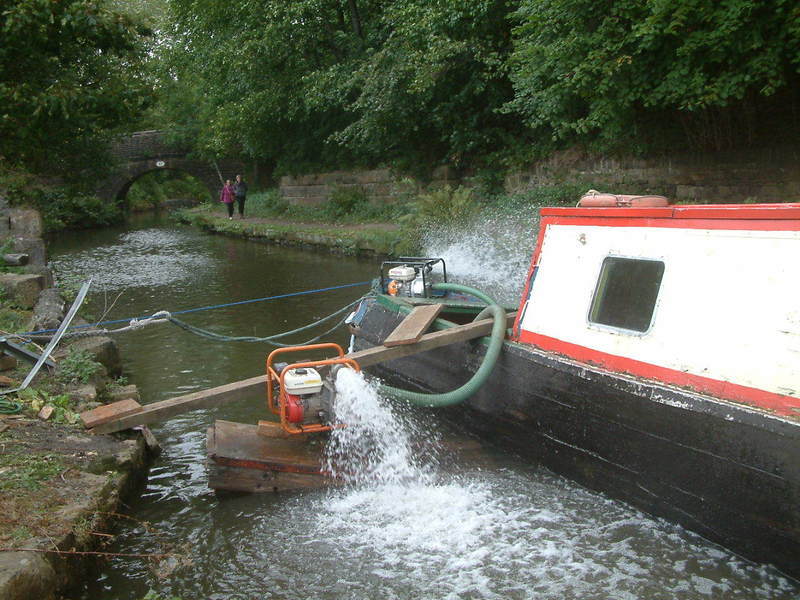 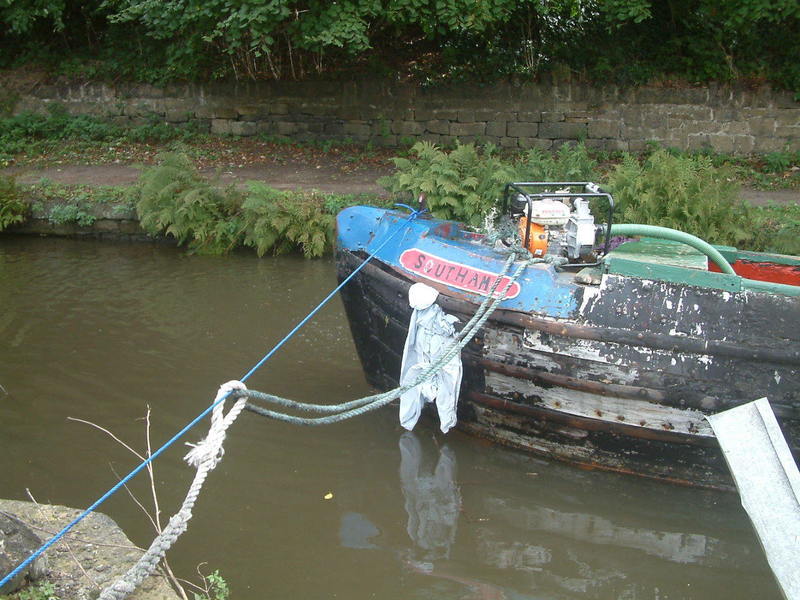 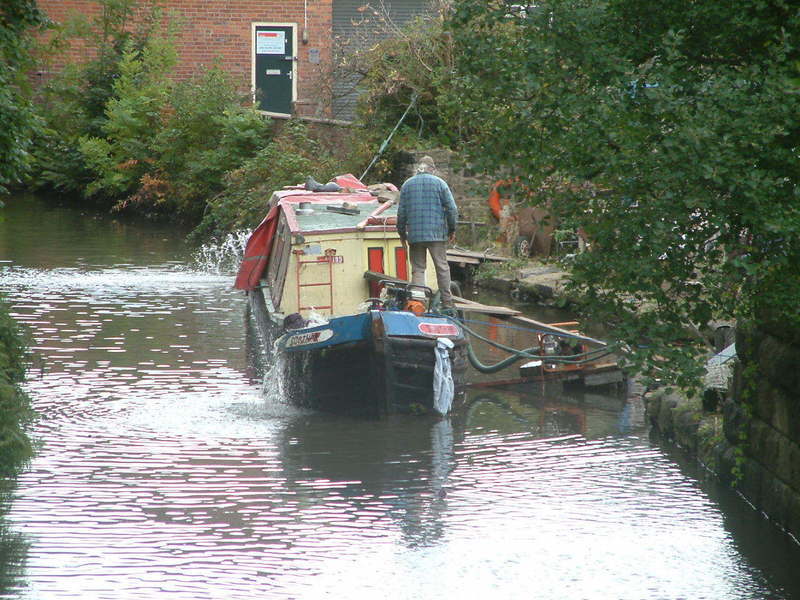 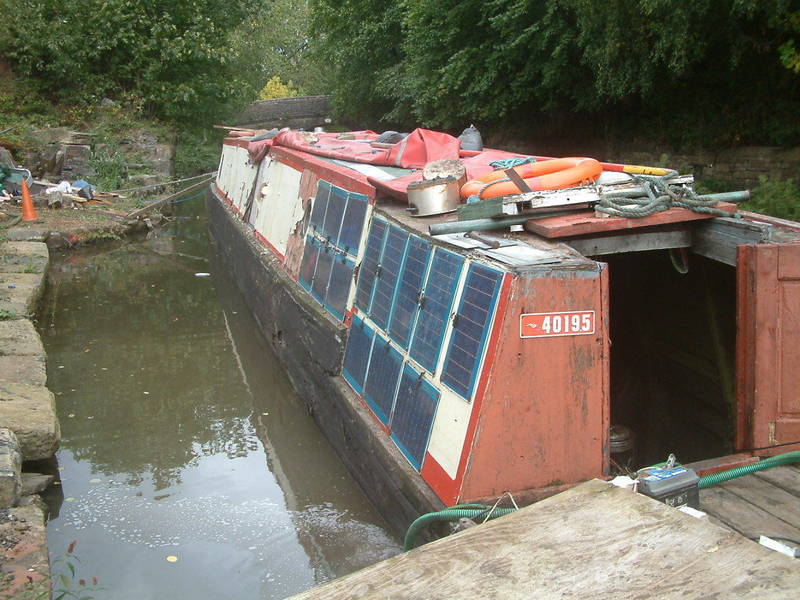 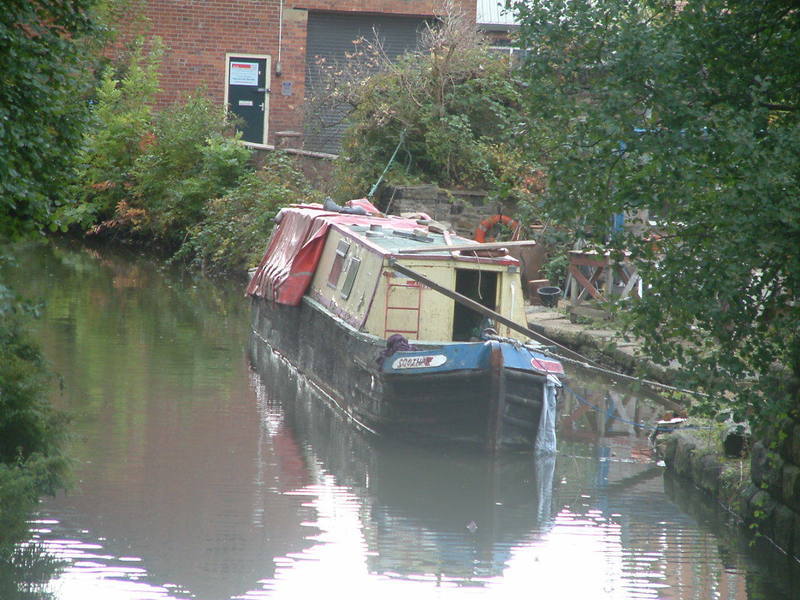 Our entire photo archive is being uploaded onto Flickr by the wonderful Kath Walls. To have a look go to http://www.flickr.com/photos/40839614@N05/ 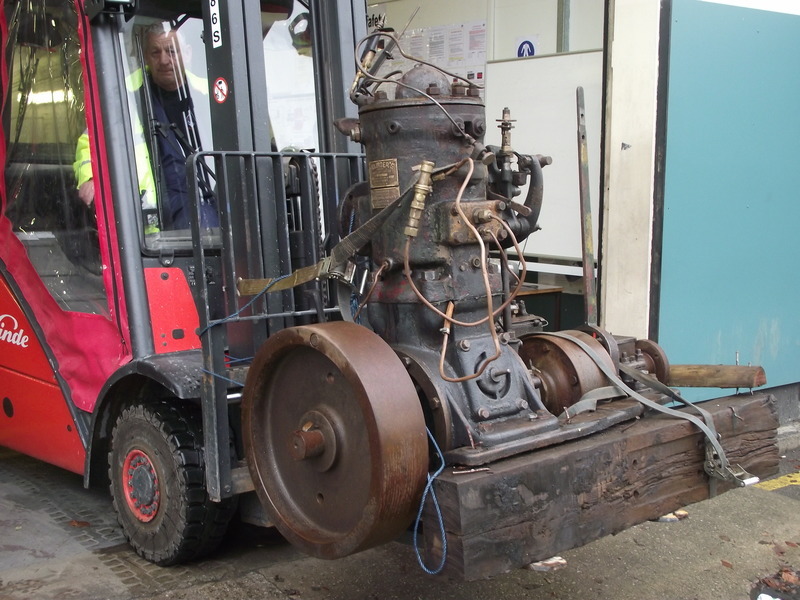 Friday morning I arrived at Portland basin to get the usual working party on the boats started. As I looked through the gates I immediately knew something was different, but it took me a few seconds to realise that "Elton" had sunk. "Elton" has always been the Cinderella of our little fleet. She is currently mainly used for sorting out recyclable metals. She really needs a Prince Charming to come along and start tidying her up. To some extent that has started, as Andy Smethurst and Terry James have made a good job of painting her back cabin in Grand Union colours.

For a while I'd been concerned about her increasingly sieve like qualities, but kept putting off the unpleasant task of moving all the useful items in her hold to search for porous bits of the bottom. My failure to make a stitch in time had led to the current situation.

Soon I had the 2" pump set up and gushing water from "Elton"s bow. As she gradually rose up in the water I went about my normal tasks, helping volunteers to get their jobs done. Ken was busy repairing "Forget me Not"s shutts and Gary busied himself cutting firewood to see us through the winter. Arfa kept "Forget me Not"s range going and showed visitors round the cabin.

Eventually the revving and slurping of the pump told me that "Elton" was nearly empty. I set up an electric pump to remove the dregs of the water and hoped for the best as it was fast approaching time for the afternoon's jaunt.

Some months ago we acquired a Bolinder semi diesel engine that had formerly powered a Grand canal barge in Ireland. When first motorised "Forget me Not" was fitted with a bolinder, sadly scrapped in 1959. It has always been our intention to re-fit one, but soaring prices had made it look unlikely that we would ever succeed. Happily, this one was affordable, though of a slightly different, earlier, design to most.

I had arranged for our engineering department to have a look at a functioning Bolinder in the FMC motor "Rudd", moored at Bedford Basin in Leigh. So it was that Ike Isherwood, Chris Duxbury and me climbed into the society's old Transit van for the trip to Leigh.

When we eventually found Bedford Basin I was surprised to see my old boat, Bridgewater packet "Parbella", tied up and looking a bit neglected. I recognised her by a dent in the bow. For two years in the 1980s I steered "Parbella" between Liverpool and Frodsham carrying grain.

Round in the basin we found "Rudd" and Tim Young, her owner, welcomed us aboard. Lester was already there. We all climbed into the engine room and admired the gleaming engine. Tim explained the principles on which the Bolinder operates. It is largely steam engine technology applied to internal combustion. He explained all the dreadful things that can go wrong. Lester looked increasingly worried.

The discussion turned to reversing. Bolinders reverse by injecting fuel at the wrong time and so reversing the rotation of the engine. this doesn't always work and sometimes the engine stops. You always need to have a strategy for dealing with this if it happens.

Our engine has no reversing mechanism. In Ireland they didn't bother with reverse, stopping the boat by running into something. For operation with a butty we need reverse, so the discussion moved to means of achieving this. One way would be to discreetly fit a gearbox under the cabin floor. The other way, which seems to be favourite at the moment, would be to assemble a reversing mechanism from spare parts and specially made parts.

The plan now is to arrange a viewing of our engine, which has an extra esoteric feature of water injection, by various Bolinder experts.

On return to portland Basin I was pleased to see that "Elton" was still floating. Closer inspection showed a problem though. The electric pump had been running continuously while I was away but the water level in the boat was higher than when I left. This meant that the water was leaking in faster than the pump could shift it out again. I rigged up a bigger pump but this just flattened the battery in no time. Evening was drawing on and I was fighting a losing battle. I decided to let her sink again and have another go in the morning.

Saturday Morning I met Anthony Benson on the wharf and started the 2" pump again. We rigged up a big electric pump in the stern end, connected directly to a generator. Overnight I had charged up a stack of batteries, so I was confident about using the big electric pump in the bow too. Soon the boat was afloat and the two of us got stuck in to moving things around until we had traced the source of the influx. In fact, there were two, Tony found one and I found the other, almost simultaneously. With the aid of that wonderful boat bodging material - expanding foam, both were soon plugged. With automatic pumps rigged up I could then retire for a much needed wash. 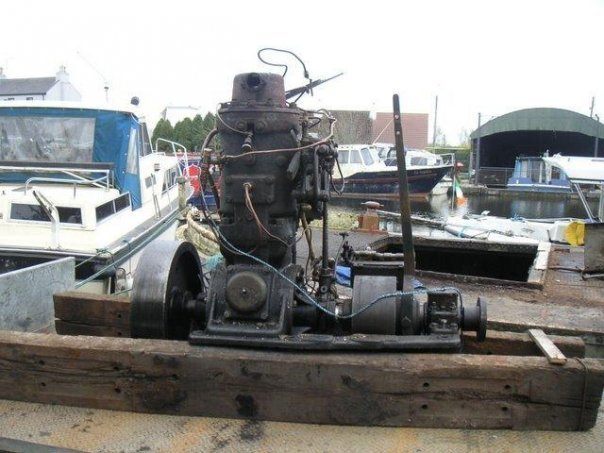 "Forget me Not"s Bolinder now masquerades under the name "Henry Grantham" on Facebook. He needs friends who can help to get him up and running again.